The short-term effects caused by alcohol include memory loss, hangovers and loss of consciousness, but often these types of problems are not recognized until they become severe. In the long run, excessive alcohol consumption can cause impotence, stomach upset, heart disease, tumors, severe memory loss, brain and liver damage.

Alcohol abuse also worsens any existing mental disorders (such as depression and schizophrenia) or causes other types of problems (severe memory loss, depression or anxiety). The risk of death from road accidents, homicide and suicide is very high.

Even moderate alcohol consumption can cause undesirable effects (for example, before driving a vehicle, during pregnancy or in conjunction with certain medications).The effects of alcohol are enhanced by those drugs that depress the central nervous system, such as sleeping pills, antihistamines, antidepressants, anxiolytics and some analgesics.

For example, if you take antihistamines to treat a cold or an allergy and drink alcohol, this increases the sense of drowsiness, to the point of making driving a car or driving a car very dangerous. Drugs used to treat certain diseases, such as diabetes and cardiovascular disorders, can be dangerous when combined with alcohol.

Children of these individuals are more likely to develop emotional disturbances, be sexually abused, and become alcoholics themselves. Many children of alcoholics have experienced some form of abuse or mistreatment. Women who abuse alcohol during pregnancy are at great risk of harming the fetus. Alcohol can also put the lives of strangers involved in accidents or homicides at risk.

Alcoholism is a phenomenon characterized by the impossibility of stopping the use of alcohol and by the uncontrollable and insatiable desire to take alcohol. Although the person realizes that alcohol is bad and wants to quit taking it, he finds himself a slave to it and unable to control it anymore. 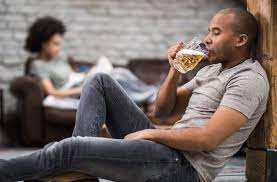 This will cause the alcoholic a strong physical and psychological dependence, a withdrawal syndrome when he stops drinking, and an increase in the level of tolerance. In doing so, she will feel the need to drink more and more to produce the same effects.

The most typical symptoms are: nausea, sweating, restlessness, irritability, tremors, hallucinations and convulsions.

The consequences of drinking inevitably have serious repercussions on the level of social, physical and family adaptation. In fact, a considerable part of road accidents are caused by alcohol consumption and it is also an important factor in workplace accidents, causing absenteeism and reduced professional performance.

The phenomenon of alcoholism is now widespread even among adolescents, who are most at risk between the ages of 15 and 24. The signs that suggest alcohol abuse in young people include a decline in school performance, attendance with different groups of friends, delinquent behavior and worsening relationships with family.