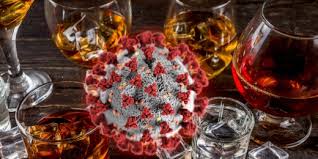 Aims to help you better understand the problem with alcohol. You can benefit from individual, couple or family therapy, family support can be an important part of the recovery process.

Medications: Medicines such as disulfiram (Antabuse) can help stop drinking, even if they are unable to cure the disorder or remove the compulsion to drink. When alcohol is consumed, the drug produces a physical reaction that causes hot flashes, nausea, vomiting and headaches.

Recent research has investigated the possible underlying cause of the association between psychotic disorders and alcohol abuse, evaluating the effectiveness of the drugs and treatments used to tackle the problem.

The DSM-5 specifies how schizophrenia

Archibald, Brunette, Wallin, and Green conducted research in 2019 aimed at understanding the etiology of the comorbidity between psychotic disorders and alcohol abuse. Previous studies had found the link between genetic vulnerability and environmental stimuli in the origin of psychotic pathology.

According to Khantzian (1997), substance use disorder in subjects suffering from schizophrenia would represent a desperate attempt to self-medicate, also aimed at mitigating the side effects caused by antipsychotic treatments.

A more recent theory developed in 2018

Known as reward deficit syndrome (Khokhar, Dwiel, Henricks, Doucette, and Green), points out that the comorbidity between schizophrenia and substance use disorder may be linked to a dysregulation of the mesocorticolimbic reward in the brain.

Cognitive-behavioral group therapy was found to be effective in the treatment of AUD, together with motivational enhancement therapy which involves the use of agreed, immediate and concrete rewards, to reinforce positive behaviors such as abstinence from alcohol.