* Please note: alcoholic withdrawal syndrome is characterized by a range of symptoms opposite to the acute effects of the substance; these symptoms, of varying severity, can afflict the patient in various ways: tachycardia, sweating, fever, tremor, restlessness, agitation, irritability, poor concentration, poor memory, vomiting, diarrhea, weakness, cramps and nightmares, up to hallucinations, thoughts paranoid, space-time disorientation and delirium tremens in the most severe cases.

According to the American psychiatric Association, alcohol withdrawal syndrome includes two or more of the following symptoms: 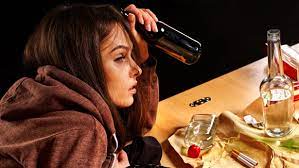 Alcohol withdrawal symptoms may occur within 4 to 8 hours of the drinker quitting alcohol, with the peak of maximum intensity on the second day and improvement by the fifth, although the milder symptoms disappear only after a few months.

How to recognize it?

Administer specific questionnaires to the patient, such as the AUDIT (Alcohol Use Disorders Identification Test) which can be performed online with immediate response. Unfortunately, these questionnaires have the big limitation of being self-filled, therefore not always responding to the real situation of the patient (the subject with alcohol-related problems hardly admits to having a real pathological problem).

Perform specific laboratory tests; in the alcoholic, the levels of GGT and to a lesser extent of other transaminases increase, the mean globular volume (MCV) increases and the concentrations of carbohydrate-deficient transferrin (CDT) increase.

Look for objective signs of alcohol dependence on the individual’s social experience: frequent temper tantrums, loss of the ability to communicate with friends and family (social isolation), irritability, inability to complete projects, delays and absences in the workplace.

Alcoholism. Most people have consumed alcohol throughout their lives and this is not a pathological behavior. However, the consumption of excessive amounts of alcohol is considered a disorder when it involves an impairment of the psycho-social behavior of the individual or when an addiction occurs (ie the inability to stay sober).

In these cases we speak of alcohol abuse and alcoholism. In this article by Dr. Paola Bizzi, we will deal with the causes, the main symptoms and the main physical and psychological damage of alcohol addiction.

Alcoholism, defined in DSM-5 as “problematic use of alcohol”, is a chronic, relapsing and potentially fatal disease. It is a disorder characterized by the drinker’s inability to refrain from consuming alcohol. In fact, those who suffer from alcoholism have lost control over their drinking habits, developing tolerance. abstinence and addiction. In fact, the alcoholic tends to drink frequently, drink large amounts of alcohol, losing the ability to drink moderately.