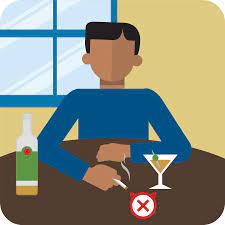 Alcohol is partly absorbed by the stomach and partly by the intestine and, if the stomach is empty, absorption is faster. The assimilated alcohol, through the blood, passes to the liver, which has the task of destroying it. However, until the liver has completed digestion, ethanol continues to circulate, spreading to the various organs.

Alcohol, one of the most toxic substances, can easily pass through cell membranes and cause injury, up to the destruction of cells. In the state of drunkenness, alcohol in the blood reaches all organs, including the brain, killing thousands of neurons, and brain damage is irreversible.

Alcohol causes an initial euphoria and loss of inhibitions, but progressively increasing quantities correspond to effects such as reduction of lateral vision (tunnel vision), loss of balance, motor difficulties, nausea and confusion.

Excessive amounts of alcohol can lead to coma and death. The speed with which the liver is able to remove alcohol from the blood varies from individual to individual; on average, the body takes 2 hours to dispose of a glass of any alcoholic drink. If you drink a lot of alcohol in a short time the disposal is longer and more difficult, and the effects more serious.

Prolonged use of alcohol over time can increase the risk of developing various more or less serious diseases, and even at low doses alcohol increases the risk for some diseases. According to data provided by the WHO, the consumption of 20 grams of alcohol per day (equal to about 2 glasses of wine) determines a percentage increase in risk:

Clearly, as the amount of alcohol increases, the percentage of risk also increases.

Alcohol is the cause of about half of the 8,000 deaths resulting from road accidents, which are the leading cause of death for men under 40. Driving under the influence of alcohol caused 4,107 road accidents in 2005 and 24,803 offenses ascertained by the Traffic Police in 2006 for driving under the influence of alcohol were 24,803.

Among drivers in an altered psycho-physical state, those under the influence of alcohol account for 70.2%. Alcohol abuse is the cause of the growing youth mortality from road accidents, for more than 40% of cases, and for 46% of deaths between the ages of 15-24.